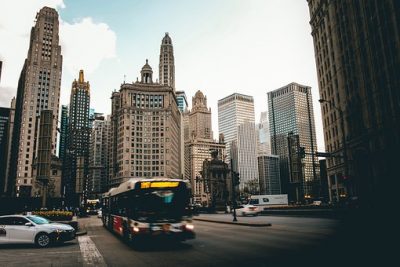 PITTSBURGH, PA – During morning rush hour, a giant sinkhole opened and nearly swallowed a Port Authority bus. The incident occurred in downtown Pittsburgh. In addition to the bus, another vehicle was also consumed by the sinkhole.

As a result, emergency crews were called to the scene at Penn Avenue and 10th Street, near the Westin Hotel.

According to Director of Pittsburgh Public Safety Wendell Hissrich, 10th Street will be closed for at least a week or two.

Moreover, the G31 Bridgeville Flyer bus was stopped at a red light when the sinkhole opened underneath. It enveloped the back of the bus, leaving the front half sticking up in the air.

Furthermore, the Port Authority reported there were two people, the driver and a passenger on the bus when the sinkhole opened underneath them. However, both were able to get off the bus safely.

While the bus driver was not hurt, the passenger was taken to Allegheny General Hospital to be treated for complaints of minor neck pain.

Apart from this, Penn Avenue between 9th and 10th Streets remained closed until crews figured out how to remove the bus from the sinkhole. Additionally, the sinkhole is approximately 20 feet deep.

Power lines had to be turned off as the bus fell on three major lines. As a result, some businesses downtown lost power and water.

Additionally, large cranes were brought in to lift the bus from the sinkhole. It took three to four hours to build the crane and then 60 to 90 minutes to pick up the bus.

The car behind the bus at the time was towed away. However, the driver was not injured.

It should be noted that several bus routes will be impacted by the sinkhole. Therefore, authorities are warning riders to expect heavy delays.