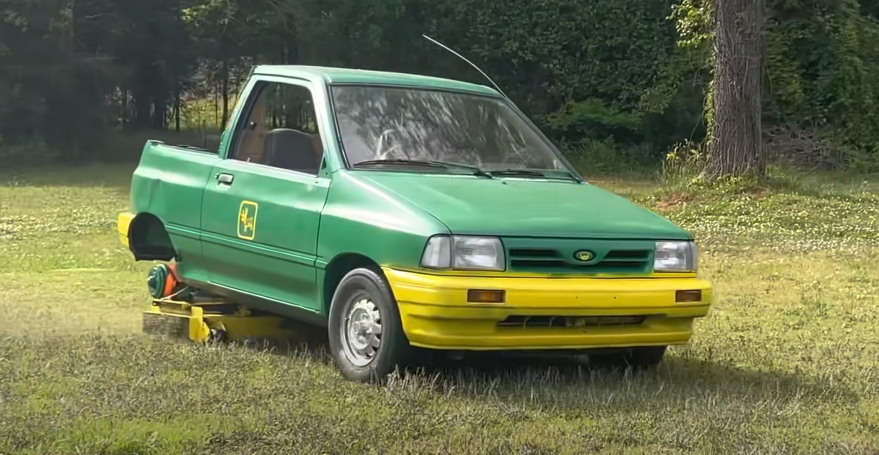 There’s something very cool about lawnmowers, when you’re growing up in a suburbia especially. They’re not large like the ones you’d find on a farm but they aren’t nonexistent or weed-wacky like the ones in urban areas. Rather, a lawnmower is really something to revel in as a suburbian citizen. Because then you get to sit in the cart, look at the various levers and smell cleanly-cut grass suck up in a seemingly camouflaged airbag. But what’s more is that it rides like some sort of go-kart on the grass. Enter Ginger Billy, a YouTuber who has uploaded footage of his car terraformed into a lawnmower. This cutter of grass would also cut time as an incredible Ford Festiva, except that the rear wheels would be replaced by a lawnmower pairing.

The idea of retrofitting a car to be a lawnmower is a very good joke in that. There is something worthwhile about making the lawnmower attach to the back of a Ford Festiva. It’s such an original invention, really. Who else could change those undeniable facts of life? It’s a given that the vehicle works pretty well with the grass. But then one wonders if it’d actually be able to change lives?

What if there was more to do with cars and other motors than meets the eye? Is there a better perspective to be had with station wagons? Maybe combo that with a radio flyer. See how that works well. You never want to go without the proper combination of items. Consider being as inventive as this man someday. That way we can write about you being a crazy car creator. Lawnmower or otherwise. How about that?

How Green Trucking is Taking Hold

Shipping Motorcycles: How We Handle Your Bike

Hyliion Likely Merging With Tortoise To Redesign An Electric Future