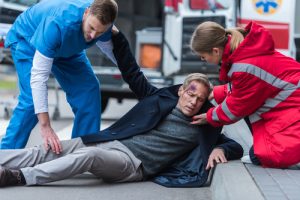 On Monday evening, Wayne Willy, a resident of Elkon Street heard his neighbor yelling. When he went to see what was going on, he saw his neighbor pinned against the fence by his truck and suffering truck injuries.

The man working on the truck thought it was put in park when it wasn’t. When he went in the back to start working on it, the truck reversed. He tried to save himself by attempting to jump in the car, but he got stuck against the fence.

The truck was stuck on his left knee. While attempting to open the door to get in the truck, it trapped him and smashed his face.

When firefighters arrived, they worked quickly to remove the truck and get him out. They had to lift the truck to get the victim out. He has 2 injuries on his leg, his knee and quads are badly injured. He was in pretty bad shape and was rushed to the hospital.