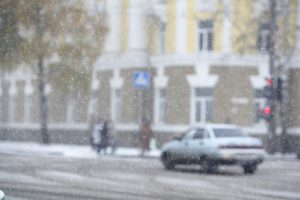 In Butler County Tuesday morning, the early morning snow could be seen on Route. 19 in Cranberry Township. It made for a slushy commute for drivers.

Pennsylvania Department of Transportation crews spent the morning salting Route 19 and streets across the county.

“This was a rather easy storm to handle,” said Mike Mattis, manager for PennDOT’s District 10 office. “It came in…a coating to an inch fell, with a little bit more snow up north. We had guys out to treat the roadways. The commute for the traveling public was pretty easy today. However, the storm tomorrow is going to be more difficult. ”

Mattis said Wednesday’s expected snowfall of a few inches, will require more work. All of Butler County’s 42 PennDOT trucks will be on the roads focusing first on the primary roads, including Interstate 79, then the secondary highways and streets.

“They’re calling for anywhere from 3 to 6 inches,” Mattis told Lisa Washington, “and it’s gonna hit Butler County around 5 or 6 in the morning. We’ll have all of our crews out prior to the storm. We’ll have our trucks loaded and ready to go. We have plenty of material and our equipment and our guys.”

The only help they’ll need says Mattis, is for drivers to be aware of the trucks on the road.

“If we are plowing, please don’t try to pass,” Mattis said. He encourages drivers to, “Stay back and give the plows room to do their jobs.”

Work is scheduled to begin at 4 a.m. Wednesday by PennDOT crews in Butler County, but it may start earlier, depending on when the storm begins.

Volkswagen ID.4 Is A Full-Forced Machine That Revs Up The Environment