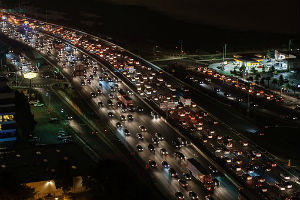 Pittsburghers are no different than most Americans, we despise traffic. Loathe may even be a better word. Anyway, you get the idea, we’re not a fan of the gridlock and the bumper to bumper crawl. So, naturally, when a report was released claiming our city was among the worst for traffic congestion, well, we believed it hook, line, and sinker.

See, earlier this month local media published an Inrixhttp://inrix.com/ study ranking Pittsburgh as the 7th most traffic-snarled city in the country. This affirmed our worst fears. Immediately social media burned hot with commentary on the matter. Yes, of course, we’re the worst… And the online traffic rants spewed ceaselessly.

But hold up. National experts have since criticized those reports, calling them out for being biased against densely populated cities. In fact, a new study produced almost entirely different results. This may suggest that Pittsburghers are unfairly piling onto the notion it’s a terrible traffic city.

Transit news site, Streetsblog, notes that Inrix arrived at its conclusions by citing data that used intercity last mile travel time and intercity last-mile speed. Essentially, this is the time it takes to travel one mile and the speed a driver moves into downtown during rush hour. Obviously, Pittsburgh didn’t score well in these metrics.

But the Boston Globe disputes Inrix’s approach. They say it unfairly handicaps more populated cities. They reference their own city, Boston, saying people may spend their entire commute in traffic, however, they aren’t traveling far.

People also disputed the use of travel speed in the study. Traffic experts noted that generally commuters aren’t concerned with speed so much as overall travel time. So Pittsburghers… It looks like as much as we’d like to point the finger at our city as being one of the WORST… It might be more complicated than that. So ponder all of this next time your stuck in traffic.